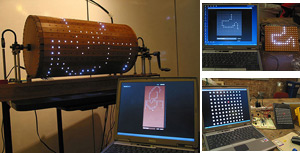 I ran across http://playmusicbox.com/ [1] tonight while checking out one of my favorite gadget sites Gizmodo [2]. I was really impressed and inspired with Jin-Yo Mok’s [3] interactive art piece – playMusicBox [1]. His use of Flash for his journal, videos, and the prototyping of his project and an interactive online version is very cool. In addition to the project itself, I really liked the online presence and presentation on his site – very clean and functional. According to his journal he collaborated with Gicheol Lee [4] of Firstborn Multimedia in NY [5] and t.y.p.o.r.g.a.n.i.s.m. [6], on the Flash work.

I was reading Jin-Yo’s journal about developing the project and saw that he used XML sockets in a Flash app to connect and communicate with a Lantronix CoBox Micro Device Server [7]. With some programming in PicBasic [8] along with some hardware he wired up on a prototyping breadboard, he was able to allow a user to interact with the Flash app to control an array of LEDs – almost like a Flash based Lite-Brite [9]. Of course this was only the beginning, the project gets much deeper and interesting – definitely take a look at the http://playmusicbox.com/ project site [1] and see the rest of the project. The project is also currently featured at the Whitney Artport [10]

I love stuff like this that combines physical interactivity with computers in a new and interesting way. This is the kind of stuff that is inspiring to me, blending art, creativity and technology.