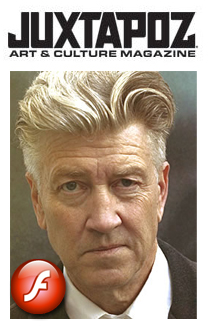 I have been a long time subscriber and reader of Juxtapoz Magazine [1], as well as a really big fan of David Lynch [2] and all of his films. I got a treat when the mail came yesterday with the March issue of Juxtapoz. On page 37, there is a great interview with Lynch on the topic of “Dumbland [3]” an eight-epiosde DVD of cartoons Lynch created with Flash. There are some great quotes from Lynch about his self taught usage of Flash, “I didn’t know anything about Flash. I’d just recently gotten going on a computer, so it was pretty strange. When you see Dumbland, you can see how I learned as I went along, and there’s a real progression in sophistication from the first to the last episodes. I love Flash animation.” Another cool quote, “Getting the tweening down was really difficult too. Tweening is the process of taking a single frame and using Flash to move it along automatically in the sequence.” I love the fact that one of my favorite filmmakers and artists is sitting somewhere teaching himself Flash. Someone needs to send the man a copy of Flash 8 Professional with the better control over tweening, or maybe even give him a lesson or two on ActionScript based tweens. I hadn’t been to his site in sometime, but its dominated by Flash content now. I stop by every once in a while to watch and listen to his daily weather report [4], yes he does daily weather reports for LA, and they are great, turse, laconic, bereft of extraneous details, just the real meat of the weather. I was dissapointed though to find out I can’t watch “Dumbland” without subscribing to the member portion of his site, I really want to see it. I’m just going to have to subscribe or purchase the DVD when its on sale.