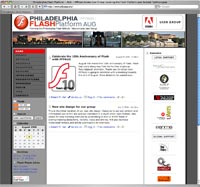 [1]I have been feverishly working on a new version of the Philadelphia Flash Platform Adobe User Group [2] site to coincide with todays 10th Anniversary of Flash [3]. I hope to have the majority of the site ready by this evening and push it live to replace the current iteration. The skeleton and CMS are in place, I just need flesh out a few of the content pages, and adjust some CSS and we should be golden. The new site will revolve around a blog-style CMS and allows us to push out content much more rapidly. It will also feature fully validating XHTML, RSS/ATOM feeds of articles, events/meetings, and will allow me to more easily hand over permissions to members to contribute articles and items directly to the site. Many improvements in store. The new version of the site will be the first piece in ramping back up meetings and events since the group has been on a temporary hiatus while my wife and I had our first child, Owen Martell Hall [4]. The second piece will be our first meeting to celebrate the 10th Anniversary of Flash [3]. A lot of groups are holding their meeting today, and there is a party at the 601 Townsend Street Adobe office in San Francisco, our group will be celebrating a bit later this month. I’m finalizing the date/location and will have up more information on the new site shortly. It should be a great meeting, we’ve got a small budget from Adobe, and we will be raffling off some prizes including a full copy of Studio 8! Here is a preview of the new site [1] to satisfy your curiosity until it goes live.

UPDATE: 9.5.06
The site is now up and running. Still a few things to finish up and old content needs to be migrated as well as new content added, but its now up and accessible. It should be much easier to update and allow contributors and volunteers to add content.