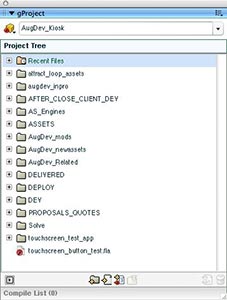 [1]I am proud to say that on August 10th of last year I was one of the first few Flash developers to buy a copy of Grant Skinners gProject Panel [2]. I realized what a boon it was to my productivity right away and have been using it ever since. For those that don’t know gProject is a drop in Panel for Flash MX 2004 and Flash 8 that does everything and much more that the built in project panel should do. I’ve been meaning to share my experience using it for some time, so here goes:

Every single Flash project I have worked on over the past year has been easier to manage thanks to gProject [2]. One job in particular during this past summer that I worked on, a large interactive touch-screen based kiosk/exhibit piece for the United Jewish Federation of New York [3] about the life of Ernest W. Michel [4], would have been extremely difficult to have completed had it not been for gProject.

The project had several gigabytes worth of data and hundreds of assets I needed to keep track of, mutiple XML based configuration files to manage everything, and several external class files to control animations, video content and integration with a Director wrapper. On top of all the assets and development files, I was at least 3 parties removed from the end client, so I went through numerous revisions in a period of a few weeks in order to get things exactly the way the designer had envisioned. We even had some pretty complex Flash based UI control mockups that allowed the designer to tweak settings to exactly as desired and then output XML for me to plug back into the final piece. Did I mention that I was on the final stages of this project while my wife was just about ready to give birth? Well, the one thing that helped keep me sane and allowed me to stay organized with all the back and forth and revisions, was gProject. gProject let me effortlessly keep track of everything, see all my files and folders from within the Flash IDE without having to change context to the Finder or switch my mode of thinking. Towards the end of development when the final testing was being done on the installed hardware, we had to nail down a few bugs, again gProject let me easily manage several different versions to do some regression testing and make sure the fixes didn’t introduce new problems. In the end when it was all delivered and Ernest himself got to see it for the final approval he was nearly moved to tears. Nothing says you’ve done a good job like making someone cry.

I have to admit that I don’t use some of the more advanced features of gProject like auto-integration of Unit Testing framework code, but stuff like the Quick Project feature, Organize Library utility, and the general ability to keep track of all your files/classes/assets (and organize them how you like to work) and quickly compile them (even multiple files at once) with the click of one icon sure go a long way. gProject brings plenty of value with its project list and recent file list, and has a great number of deeper features for the more advanced Flash developer. Did I mention it will even create stub classes for you in packages based on a template class you provide? With the latest version 1.3, Grant even added in a cool replacement Start Page panel that replaces the default Start Page in Flash with one with a sleek black look and feel that integrates your gProject project list, as well as bonus RSS reader that pulls in content from MXNA [5] and Fullasagoog [6] aggregators.

After working with gProject on every single Flash project for the last year, I really don’t know what I would do without it. I would feel as if Flash was crippled in some way if I had to give it up now. Its one of those things that should have been packaged with Flash from the beginning. If you want to read more about it in depth, take a look at the documentation [7] to find out about all the features and to see additional screenshots [8]. Of all the software packages and add-ons, components, etc. that I’ve purchased or invested in over the years for Flash, I can honestly say that for the money this is definitely one of the top items that has increased my productivity across the board. Don’t take my word for it though, read a couple [9] other [10] reviews [11] from the past [12] about it, and then pick up a copy for yourself.