I’m sitting in my hotel room in San Jose, CA for Adobe Community Summit week, watching all the RSS feeds, blog posts, twitters, etc. about a ton of exciting news coming from Adobe this evening, not even sure where to start, but here goes: 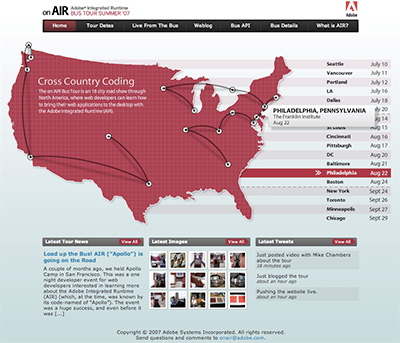 First off several betas just hit labs.adobe.com [1]: Flex 3 beta [2], Flash Player 9 Update 3 [3], and Adobe AIR (Adobe Integrated Runtime) [4] B1 M4 (aka Adobe Apollo), Adobe AIR Extension for Dreamweaver [5]. There is a lot more to it than just the betas. There is a huge AIR developer derby going on with unbelievable prizes [6] for the best AIR applications developers can come up with. I’m super excited about the AIR Bus Tour [7] as it is making a stop in Philadelphia at the Fels Planetarium in the Franklin Institute [8] – a very cool venue indeed, don’t miss out on a date in your city, make sure to register! The bus tour will be interesting to follow with live video and data feeds as the AIR Evangelists hit 18 cities across the county in three legs over the next few months in a custom AIR tour bus.

The Flash Player 9 Update 3 beta has some great new enhancements including an API for hardware accelerated fullscreen playback, multi-core support for improved rendering speed on machines with multiple CPU core’s, enhancements to the On2 video decoder for better performance and quality and several other items, Tinic Uro has some more detailed info [9] on this as well as Emmy Huang [10]. Ted Patrick dishes the dirt on all things Flex [11], including info about Flex 3 Nightly builds and the public Flex 3 bugbase, there are new videos about Flex 3 and the AIR Bus Tour on http://video.onflex.org/ [12], just too much cool stuff.

I’ll post up some more links later tonight on this stuff, but right now I’m a little jetlagged from the trip out here today, and need to get some rest for the rest of the week.

Tomorrow also marks the kickoff of Apples WWDC conference – hoping to hear some official words on Flash support for the iPhone – the latest commercial clearly shows Flash content functioning in the iPhone Safari browser, but there havent been any official announcements yet from Apple or Adobe – no one wants to feel the wrath of Steve and spill the beans before he does, but it is looking like its pretty much a shoe-in that the iPhone will have a full featured Flash player when it ships.